The topics on which the KNS end-terms are based, are incorporated in this book into everyday situations. These situations will be familiar for both Dutch and new-Dutch people. The book tells of the experiences of Monica, a 35 years old Brazilian lady who lives in the Netherlands.

KNS is a mandatory subject for all who want to apply for a permanent residence permit. With Kom verder!, any applicant can pass their integration exam!

Kom verder! consists of 16 lessons, dealing with topics such as work, education and upbringing, history and institutions. Each of these topics are dealt with in two lessons, with a variety of text types: dialogues, forms and letters. The texts are accompanied by different types of questions to understand the course material even better. The texts are inviting for (class-) discussion. The code in the book grants access to the accompanying website, where all audio files of the texts can be found. The wordlists can also be found on this website.

This book provides free access to the KNS Examentraining (KNS exam training). This is an online programme that helps with the preparation to the KNS exam. All topics are explained in understandable language. There are 300 questions and answers in total, along with illustrations and feedback. This product grants one year access to the online course material.

Kom verder! is suitable for both medium and higher educated non-speakers of Dutch. The course starts at A1 level and trains up to level A2: the required level for the civic integration exam in the Netherlands.

Ad Bakker (Gouda 1955) was part of the first wave of students to graduate under the Secondary Education Act when he earned his Atheneum diploma in 1974. He passed the final exam at the Secondary Horticultural School the following year, and began his career as a teacher in flower and vegetable cultivation in lower horticultural education. Meanwhile, he studied part-time to obtain second- and first-level teaching qualifications in Dutch.

In 1982, he moved to Curaçao to work as a teacher in agriculture. In 1987, he made the switch to Aruba to teach Dutch in senior general secondary education (HAVO) and university preparatory education (VWO). In 1988, he began studying for a newly created degree in Aruban law at the law faculty that was established when the island was granted semi-autonomous status. In 1994, he graduated from the programme and returned to The Netherlands. He became a speed-skating instructor and an NT2 teacher in Amsterdam.

Through a supplementary programme at Radboud University Nijmegen, he earned a degree in Dutch law in 1996. With this background, he developed a special interest in Societal Orientation. He created an accelerated integration programme for Surinamese immigrants for the Regional Training Centre (ROC) in Amsterdam. This programme led to the development of the methods Nederland in zicht and Kom verder!

Since 2005, he has devoted himself entirely to writing. In addition to developing material for Knowledge of Dutch Society (KNS), he also created the AAP  literacy method and a simplified version of De canon van Amsterdam. He wrote the section on improving literacy for Naar Nederland. Since 2007, he has managed the web blog for the KNS exam. His columns appear on the site each week. From 2005 to 2012, he served as a supervisor for Kantlijn, the Amsterdam writing club for the homeless. 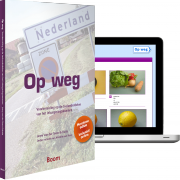 Op weg is the accessible first step on the NT2 learning pathway and helps students prepare for the language sections of the civic integration exam in the Netherlands. The various exam sections are covered in twenty le...

Onderweg helps students thoroughly prepare for the language sections of the civic integration exam in the Netherlands: listening, speaking, reading, and writing. In twenty short lessons, students intensively train the...

You get to know Dutch society best by participating in it, but new Dutch citizens usually do not have the time to do so before taking the civic integration exam. Wegwijzer is the solution to this problem. Author Jenny...

Are you getting the free lesson plans twice a year, update on our products, events and special offers we send out in our newsletter? Sign up and we will keep you posted!
Formulier succes
Formulier foutmelding
Vergelijk 2 producten